Meet the candidates on May 5 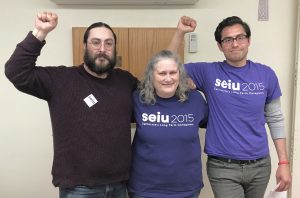 The Democratic Club of Lake County had its first pot luck dinner of the year at the April 11 meeting.   The meeting followed at 6:30 pm in the Social Hall of the Methodist Church at 16255 Second Street, Lower Lake CA. 95457.

We had a guest speaker, Mario Fernandez, talking about the local labor unions and what their challenges are in the current political climate.

Mr. Fernandez is the political organizer for SEIU 2015 on the North Coast of California covering the counties of Del Norte, Humboldt, Mendocino, and Lake.

Before becoming a political organizer for SEIU 2015, Mario began his involvement with the Labor Movement shortly after graduation from college. He worked for two labor councils assisting them with their elections, and worked for the California Faculty Association as they prepared for a massive statewide strike in 2016.

Though, he currently lives in Eureka, Mario has roots in Lake County, having attended school at Lucerne Elementary and Kelseyville Middle School.

IHSS workers in Lake County are represented by SEIU; so this subject is very relevant to our local community.

SEIU Local 2015 is a diverse, ethical, and transparent 21st Century worker organization leading with vision, understanding, clarity, and agility, thereby thriving in an ever-changing world.  Through the work of our members, by building partnerships, and embracing innovation and education, SEIU Local 2015 long term care workers will have achieved quality jobs that deliver livable wages, retirement security, respect, and the right to a union for all.  SEIU Local 2015 will have placed the new American Dream within reach by ensuring the accessibility of quality long term care for seniors and people with disabilities, and securing a quality life for our communities which includes access to affordable quality healthcare and housing, safe neighborhoods, educational opportunities, and racial and environmental justice.