WEEKLY ADDRESS: Ensuring Our Free Market Works for Everyone

April 14, 2019
California is often perceived politically as a sea of solid “blue” – a state, with its Democratic governor and Democratic-controlled legislature, that has become synonymous with progress.
“Not so fast!” says a coalition of groups concerned that Democrats, while they have the edge in this state, are taking voters for granted. 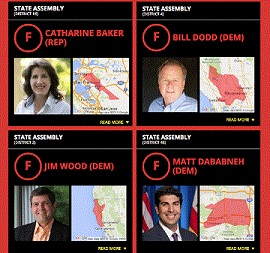 Last week, the Courage Campaign, which leads a new accountability project whose members include the Alliance of Californians for Community Empowerment Action (ACCE), Progressive Kick, Presente.org and ColorOfChange, released the People’s Report Card of California. This scorecard examines every assembly member’s vote on 25 critical bills from the previous year. The report card measures whether legislators voted to prioritize the needs of their constituents over corporations or special interest groups. Its genesis came late last year when Governor Jerry Brown was trying to push through two big climate-change bills, says Eddie Kurtz, the Courage Campaign’s executive director. Read more